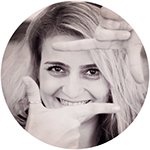 Serpil Altın  was born in 1979 in Eskisehir. In 2002, she graduated from Anadolu University, Faculty of Communication Sciences, and Department of Cinema-TV. After graduation, she worked as an assistant director and producer in the cinema and TV series. In 2014, she participated in many national and international festivals with her short film “Holiday Gift” “Aka: Bayram Harçlığı”, which was supported by the Ministry of Culture.